FPW Day 1: Al-Karam opens the show well…and then it all goes downhill

It was a hot, balmy evening. Fashion Pakistan Week (FPW), slotted in the latter half of October, was dedicated to ‘Winter Festive ‘19’ but there was certainly nothing wintery about the open-air venue where even Karachi’s crispy night breeze had failed to make an appearance.

The world is changing and seasons are shifting pace. Global warming, though, was the least of FPW’s problems.

The humidity could have been shrugged away had the catwalk showcased moments of fashion brilliance. I am not even stressing on the need for collections that were brilliant overall. Just a few moments would have sufficed, made the weather tolerable, made the long, tedious delays less tiring.

Instead, the delays were painful. On a day when just five collections were featured, the show started inexorably late and there were frequent 20-minute delays between most segments.

Even these delays were not FPW’s biggest problem.

The red carpet yawned – as it sadly tends to do at fashion weeks these days. Media was scattered about, searching for a few famous faces to photograph. There were hardly any. The catwalk, though, brought on the star power.

The first show of the day by Al-Karam Studio packed in the punches with a heavy dose of stars and starlets: Ayeza Khan, Muneeb Butt, Sami Khan – the rotund little boy from Suno Chanda – and Hadiya Hashmi – the little firecracker from Nescafe Basement. Saboor Aly walked for Boheme, Nimra Khan for Gogi by Hassan Riaz and Sarwat Gillani for Yasmin Zaman.

And yet, the catwalk couldn’t quite look glamorous enough. It was curious that all these brands had invested into showstoppers but had selected some very unflattering outfits for them. Why did they do so?

I understand that showstopping at fashion weeks generates income for celebrities but can they still start taking stands about what they are going to be wearing? Sloppy, untidy concoctions do not befit their starpower.

The show started off prettily. Al-Karam Studio’s collection was called ‘La vie en rose’ and on that tangent, the brand spun out oversized florals, fashioning them into dresses or working them on to a neckline.

There were also plenty of ruffles, pleats, big bows and floral prints worked with tiny smatterings of embroidery. These prints and embellishments, should they make an appearance in the brand’s retail collections, are likely to be hits. 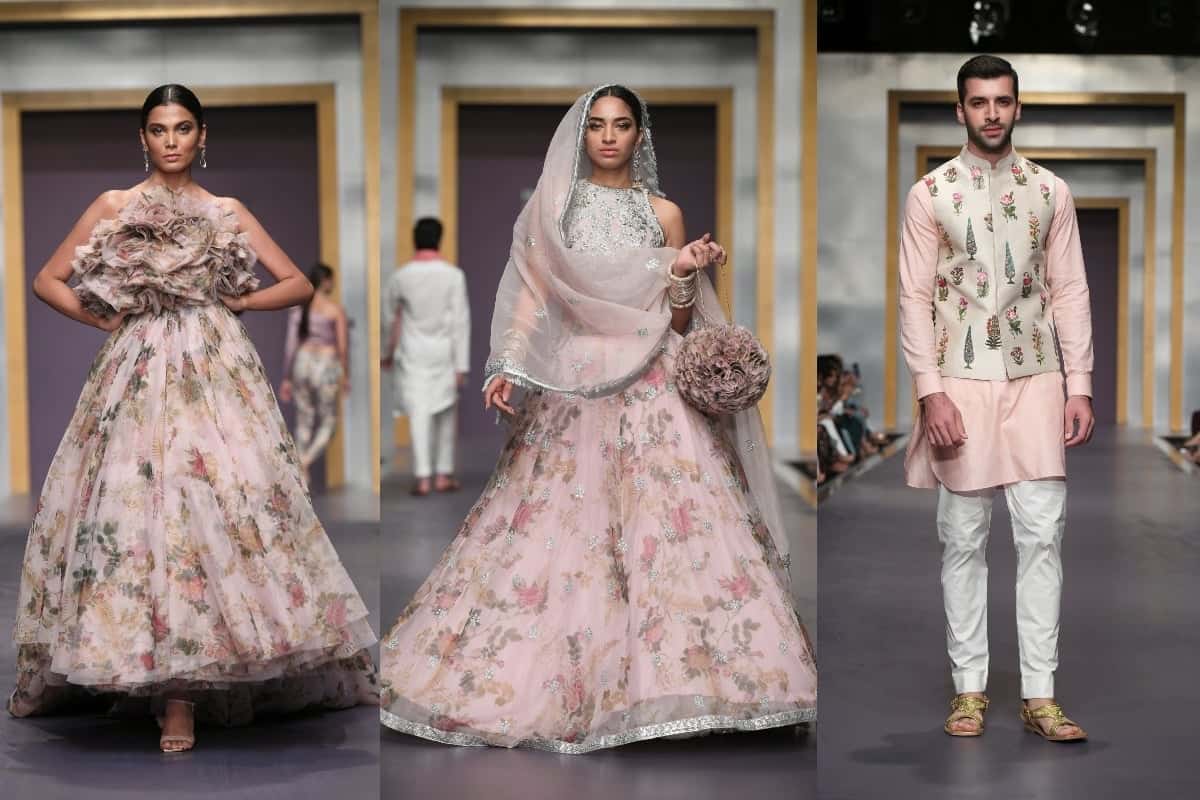 All about that go big or go home philosophy.

Soon, though, the show shifted gears and went into complete desi mode. The light pink lehngas and saris worked well but then, the palette dived into deep maroons, golds and black. It almost seemed as if the brand had lost its way, traversing tulle florals on short dresses and then, suddenly sidestepping into deep gold embroidery on velvet.

The lack of cohesion made the clothes seem out of place although, seen individually, many of them were eye-catching. 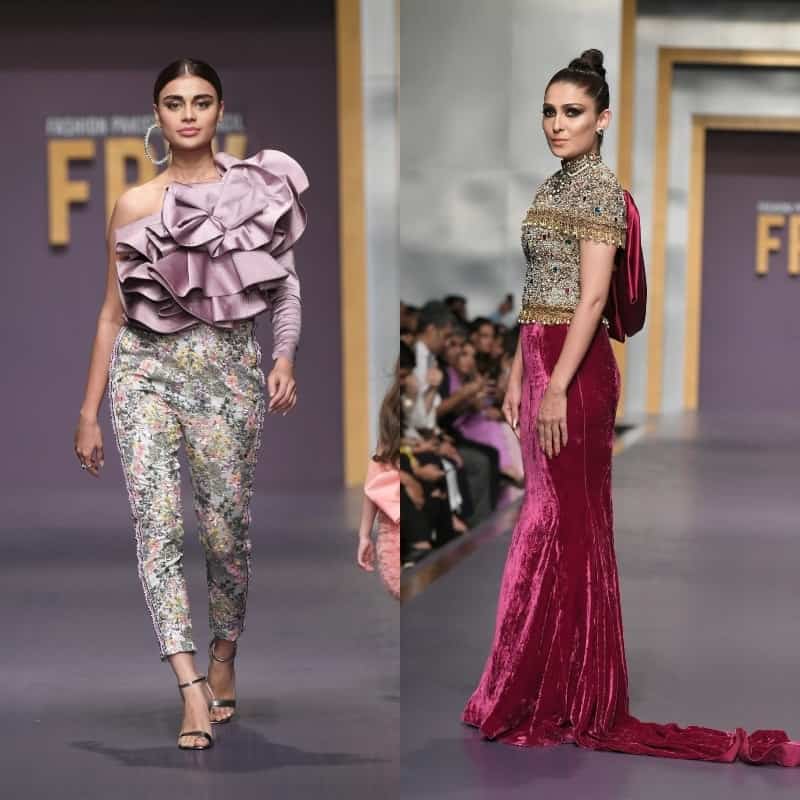 It’s just that Ayeza can look absolutely stunning – over the past few months, she’s particularly stood out in Al-Karam campaigns. To put her in an embellished velvet number with a big concoction at the back just seems wrong.

What did help the show along were the little children that came on to the catwalk. The little girls and boys were adorable and the outfits they wore were also quite lovely. Bring them to stores, Al-Karam – they’re going to sell out!

I remember Boheme making its debut a few fashion weeks ago and making such a splash with flamboyant artistic elements and traditional details. Only last year, Zoe Viccaji had showstopped for the brand, wearing a standout lehnga with ‘kath-putlis’ or wooden puppets playing along its canvas. Lovely. 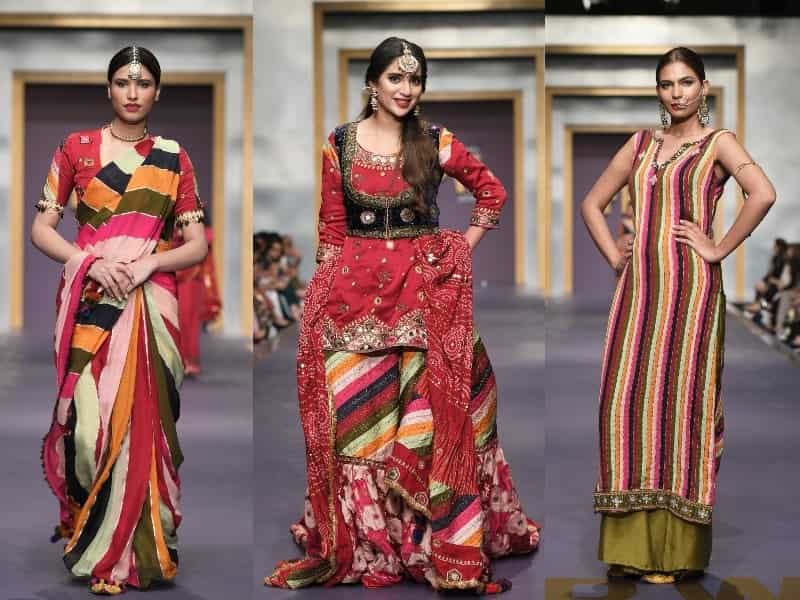 Boheme’s second outing at FPW left a lot to be desired.

The FPW collection this time wasn’t as lovely. Ethnic chunri, chata-pati, mirror-work and gota were mixed in multi-colours onto silhouettes that were often untidy. The embellishments, also, required better finishing. The men’s sherwanis were better, offering interesting colour combinations.

But the collection plummeted to a particularly unfathomable low with one outfit – a male model wearing a deep red angarkha and chooridar, with a matching turban, khussas, a deep blue velvet coat and a string of rubies. Had the show overall been a strong one, this faux pas could have gotten excused as a quirk. But it wasn’t a strong collection. 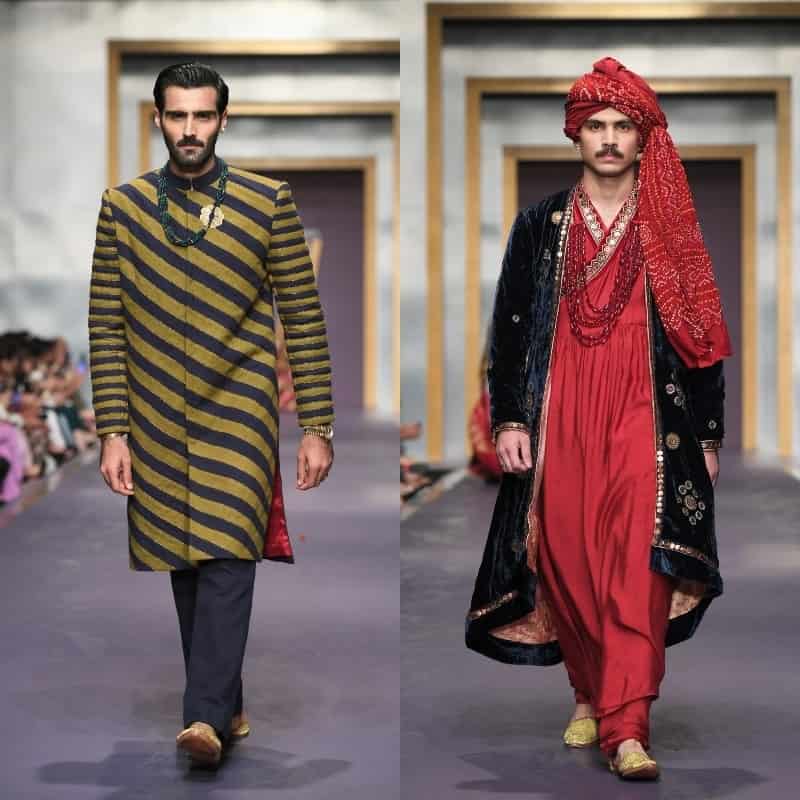 Not going to lie, some of the ensembles were almost meme-worthy.

Showstopper Saboor Aly’s gharara was a busy, busy mesh that very obviously didn’t fit her well. And given Saboor’s popularity, her image has been trending all over social media. It isn’t a very good representation of the brand.

Gogi by Hassan Riaz has always had a predilection for fanciful design. The designer very obviously doesn’t like ordinary silhouettes, styling or generally appealing colours. But in the effort to be extraordinary, Hassan Riaz tends to go over the top. His collection at FPW was called ‘Lost in my French garden’. He really did get lost in it. 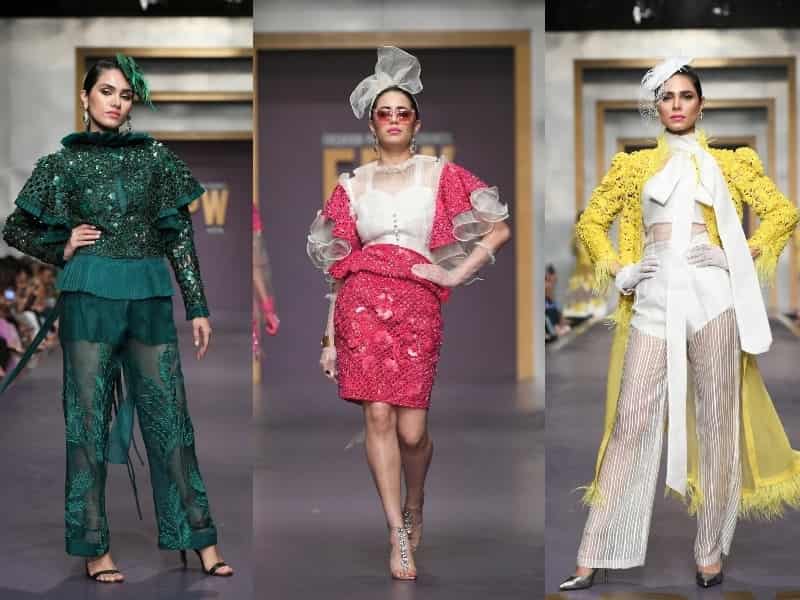 Riaz really ran with the name of his title.

The silhouettes, evidently meant to look French, did not impress. For instance, model Roshanay wore an outfit that had ruffles, layers, tone on tone embroidery, followed up by sheer pants. Why? 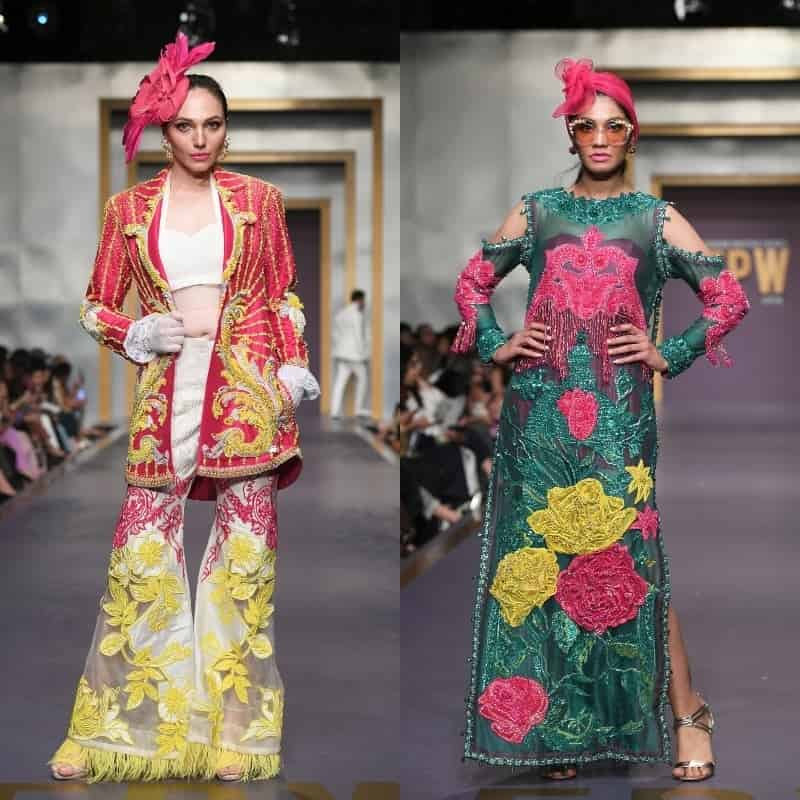 Too much is happening here!

The only outfit that did seem to make some sense was the long jacket worn by Sunita Marshall. 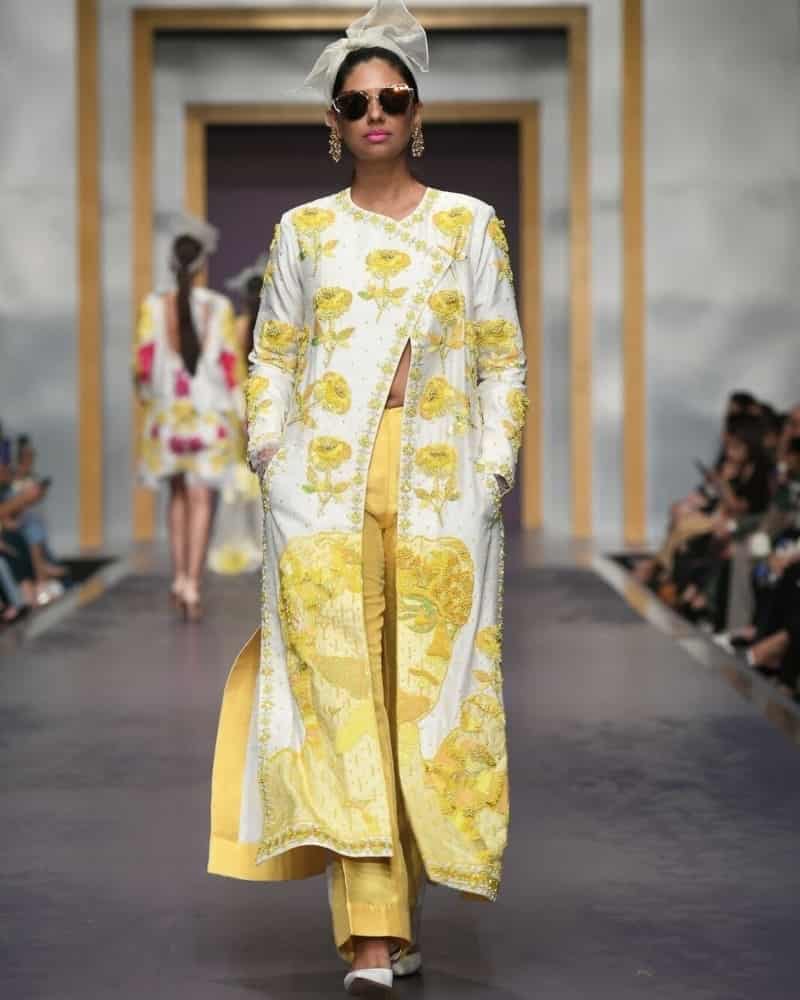 All this yellow is more fitting for a summer collection.

But moving beyond silhouette, what I did like were some of the embellishments. The large three-dimensional florals and uniquely placed sequins were interesting. If they hadn’t gotten submerged in multiple complicated layers, they would have had been much more visible and all the more appreciable.

Yasmin Zaman’s collection followed and its simple palette and clean lines were refreshing. Zoning in on the modern-day wedding, the designer presented a fusion line with plenty of dresses, lehngas, and short shirts paired with sleek cigarette pants.

Her embroideries were particularly interesting, worked into distinctive swirls and borders. Not your usual phool-patti which may be pretty but is instantly forgettable. 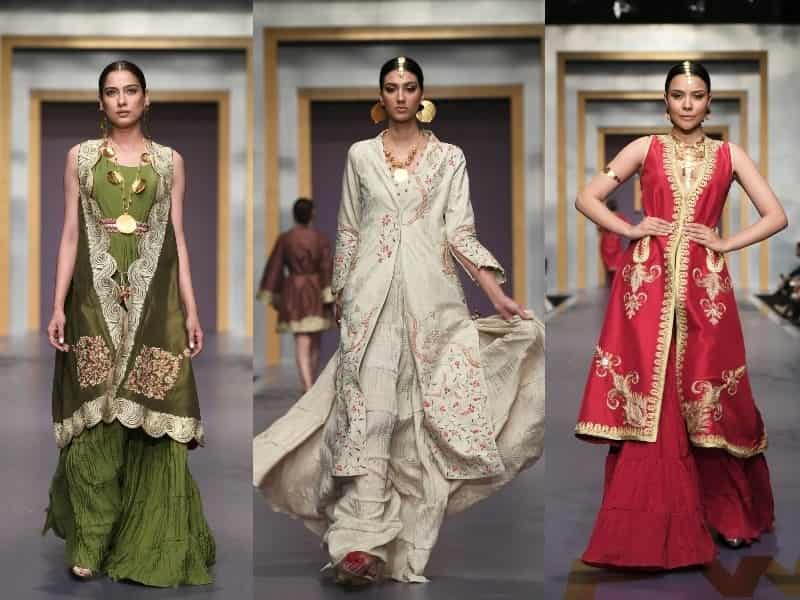 I liked that Zaman’s clothes weren’t drowning in embroidery.

Having said this, this was a very wearable collection; the sort that can truly be appreciated while on retail racks and would, I feel, be bought immediately. 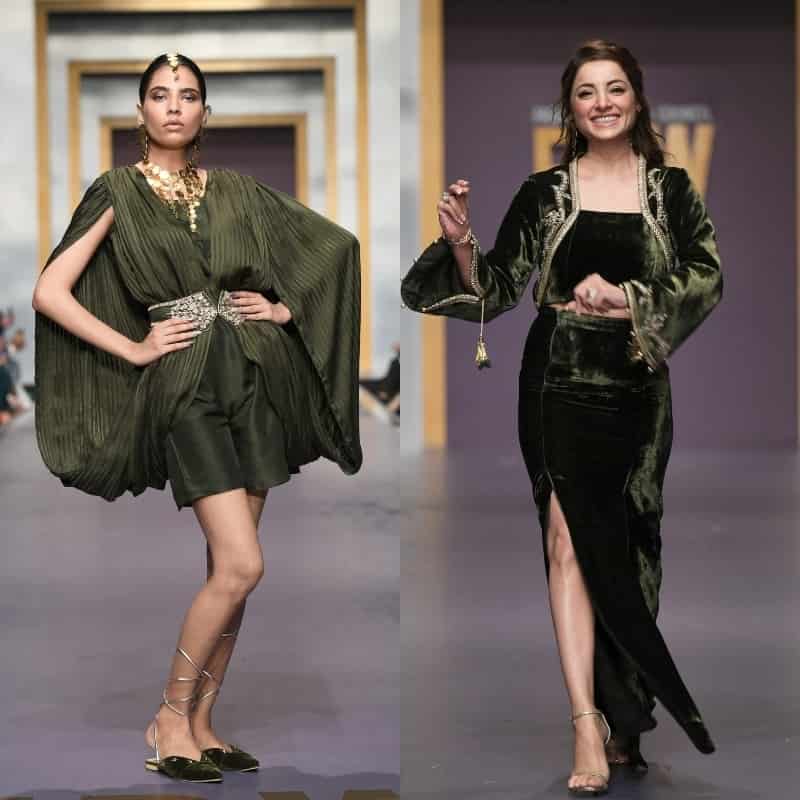 A retail-friendly collection for the most part.

Up on a spotlighted catwalk, the clothes would have been less memorable had it not been for the designer’s collaboration with jeweler Haya Lutfullah. Haya’s teekas and elaborate neck-pieces complemented Yasmin’s understated signature.

Ayesha Farook likes flowing silks, kaftans and fitted boleros. They have always been a mainstay in her brand and they dominated her collection, which was the last of the day. 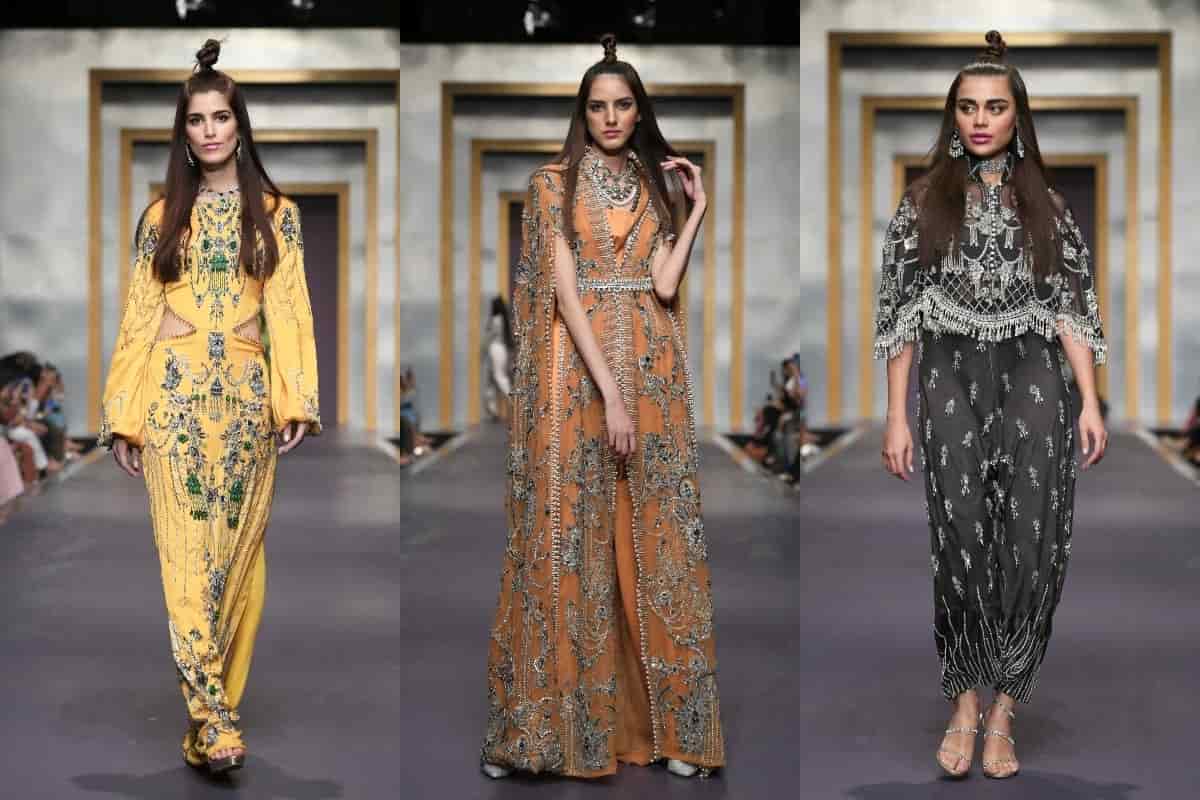 AFH brought a very signature showcase for Day 1 of FPW.

I wish that she had been more innovative; perhaps experimented with fabric or colour if not with the silhouette. 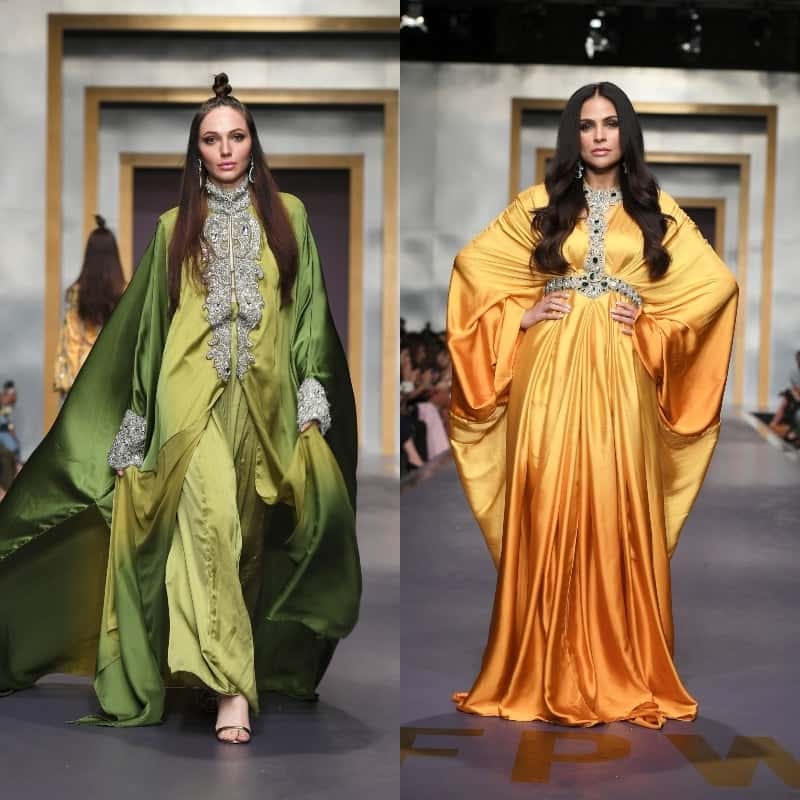 Maybe she went over the top with all that silk.

This was a wearable line and I imagine that the designer’s clientele will make a beeline for the kaftans, the tunics with billowing sleeves, the long, floating silk dresses.

But there needed to be more.

Then again, there needed to be so much more to FPW. One of the longest standing fashion weeks in the country should not be delivering a day which is littered with fashion blunders. When fashion weeks become the target of memes and ridicule, it is a sad day for the industry and for all of the many individuals who have been trying hard to strengthen it. This was that sort of day.